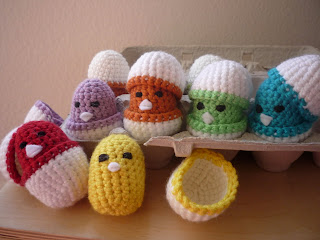 Well I am finally healthy enough to be up and writing on the computer again, YAY!!! I never appreciated a healthy body until I didn't have one. Without a body you really have no ability to function in the world. So I am grateful every morning that I wake up and have the energy to get out of bed, and even if I am in pain, at least I can get myself to the bathroom!!
I made these eggs as a game for all the little munchkins in my life with the idea that it would help them learn their colors and help with fine motor skills. Each egg is a different color and comes inside two egg shells that are ringed with the color of the egg inside. The child has to match up the correct egg with the shells. My friend's four year old has had a blast with them. They are super easy to make and go great in Easter baskets :)
So the latest happenings hav 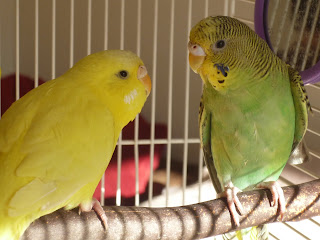 e been that Aram and I got a new bird to accompany our other Parakeet, We named her moonshine to pair her up with sunshine the other birdy. They took a little time getting used to each other, but now seem to be best of friends. There is more noise in the house and the mess is more than double what one bird's mess was (how is that possible???) but I am happy to have more companionship in the house since I am here all alone during the day.
We got mostly moved into our new apartment when both of us got sick... I got an ear infection and Aram got some kind of bacterial infection in his sinus/throat/chest. so we have furniture with bins and boxes stacked underneath and around. I keep looking forward to the day when I can get up and move boxes and put away all this crap, but for now the best thing that I can do for myself is to rest. Everytime that I do too much I end up in major pain and/or sick, so I have to be really careful how much I do and surrender to the couch.
I have been able to make it to 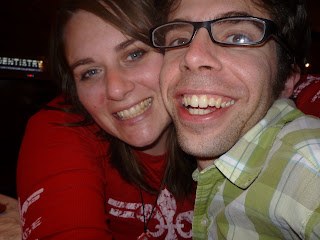 westwood these past four weeks to see Aram perform improv. He has always told me that he dreams of doing comedy, and so it makes me so so happy to see him realizing his dreams. He has been in this contest similar to American Idol call the X-ecution. He is down to the last six people and I think he has a good chance of being the last two people, especially since he has a huge audience vote. All our friends have been making the trek every friday night in bumper to bumper traffic to be there and raise their hands for Aram so that he can get through to the next round. Anyway, it has been fun for me to get to get out and LAUGH!! I honestly think that laughing this much has been a large part of my getting healthier. they say that Laughter is the best medicine and I believe it. I deal with so much pain every day that I think it is really important to counter that with a big positive for my brain like laughter. So I have been making more of an effort to find ways to laugh, watching funny shows on TV, or funny movies, I am working on starting a joke of the day to help create some levity in my life.

The other thing that I am working on is possibly writing a childrens book. Its all conceptual right now, but I have this idea for a series of childrens books about Clairybell the Dragon. So I am looking into that and have even started to draw some rough sketches of my ideas for the dragons. I have such a huge focus on children, I am just waiting until my leg gets better so that I can have some of my own!!!

I have not done that much crocheting in the last month, besides the eggs of course. I started to make some things and could not concentrate well enough. so I kept ending up with circles with 17st. I usually work in counts of five or six, so getting 17 is a bad number! so I put down my crochet hook and gave my body and mind some time to heal. My best friend Jewel found this new type of puzzle called KenKen, which is similar to sudoku, but you have to use math to get the squares to work out. so I have been spending some time working on KenKen puzzles which has been fun.

Mostly it has been somewhat difficult for me to deal with Aram going to work and being stuck on the couch all the time. I am dealing with boredom. What does a person do left at home all day on a couch with her leg in the air? I would just love to be in the kitchen cooking up things, but it requires too much standing on my leg. twice now I have gotten carried away baking things and felt the heavy cost on my health the next day and beyond. I think that focusing on writing a book will help stave off boredom. I have always wanted to write a book and I need goals and accomplishments.
Posted by RedFlame at 1:15 PM

RedFlame
I am someone who loves crafts and being creative, I am healing from a rattlesnake bite, so I have lots of time to make my fiber arts. I am also a big reader and adventurer.